Paul Mayhew-Archer, Ros Barber, Anthony Anaxagorou and Bob Chaundy join our host David Freeman for this episode of Ex Libris After Dark, recorded in front of a live audience in Blackwell’s Bookshop, Oxford on 10th March 2017

Ros Barber – poet, scholar and an award winning and critically acclaimed author. Her first novel, The Marlowe Papers, received the Desmond Elliot prize. Her latest novel Devotion was short listed for the Encore award and has been described as ‘compelling’ by both The Guardian and The Independent.

Paul Mayhew-Archer – radio and TV producer and comedy script writer, whose most notable works include The Vicar of Dibley, Mrs Brown’s Boys and Miranda. Paul will be discussing his award winning documentary, Parkinson’s: The Funny Side.

Anthony Anaxagorou – internationally acclaimed and award winning poet, short story writer, and activist whose live performances have been described as ‘a near spiritual experience’ Anthony will be discussing Heterogeneous, the definitive anthology of his poetry.

Bob Chaundy – freelance journalist and writer who was the obituaries editor at the BBC for 18 years. Bob’s latest book Little Black Trains: Life, Death and Commuting is a comic murder mystery story that also lifts the lid on the art and pitfalls of obituary writing.

How To Train Your Dragon – Cressida Cowell 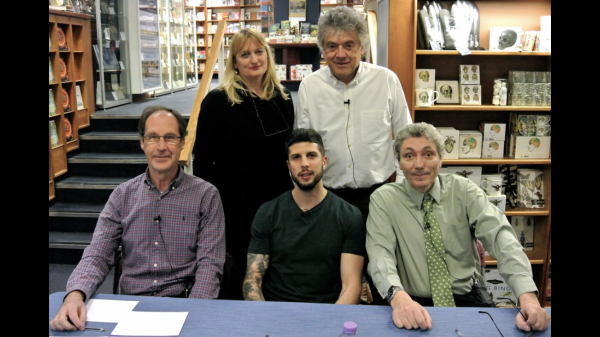