Tracy Chevalier, Julian Baggini, Paul Bassett Davies and Katerina Diamond join our host David Freeman for this episode of Ex Libris After Dark, recorded in front of a live audience in Blackwell’s Bookshop, Oxford on the 30th of October 2017

Tracy Chevalier is the award winning author of nine novels including the phenomenal best seller, Girl With A Pearl Earring. Chevalier will be discussing her latest work, New Boy, a retelling of Shakespeare’s Othello.

Julian Baggini, the renowned philosopher and co-founder of The Philosophers’ Magazine is also a prolific author, journalist and blogger. He will be discussing his new book, A Short History of Truth: Consolations for a Post-Truth World.

Paul Bassett Davies is an award winning comic scriptwriter, author, director and actor. He founded the Crystal Theatre, was creative director of the London Comedy Writers Festival, and is director of Euroscript Ltd. David will be discussing his latest ‘hellish’ novel, Dead Writers In Rehab.

Katerina Diamond is a Sunday Times bestselling crime writer who was hailed as ‘the new Queen of Cime’ by Heat after publication of her debut novel, The Teacher. Diamond will be discussing her third book, The Angel.

How to craft with cat hair, by Kaori Tsutaya

Bigfoot Twerked and I liked it, by Raven Blackbird

The next episode of Ex Libris Live will be available in two weeks. 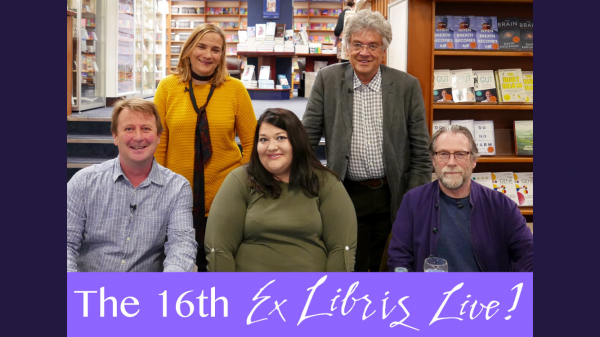